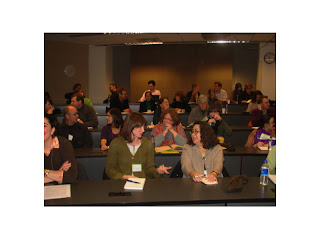 The picture at left shows some of the people in the standing-room-only crowd that came to hear our panel called, Risk & Renewal in Letterpress, at the inaugural conference of the College Book Art Association (CBAA), at the University of Iowa-Iowa City in January 2009. Inge Bruggeman (partially viewed at left, in front), Harry Reese and I talked about the changes that we see happening in letterpress today. I led off, describing historical influences that have affected letterpress since 1980. Inge followed, and then Harry. Each spoke eloquently about how their work in letterpress has developed throughout their careers. But the reason that I've started my blog off with this picture and this conference, is because, before things got started, the three of us had wondered just who would show up. There were plenty of people in at the conference--240 attendees, to the excitement of the planners--but with three panels running concurrently on very different topics, we had no idea what would be the interest level in our letterpress panel. We couldn't believe it when people kept coming in, and we were only disappointed that the discussion period at the end was too short to allow comments by only a few of those who wanted to speak. Clearly, we had hit a nerve. Letterpress--that bastion of tradition, so many would have us believe--was generating a lot of interest among artists of all ages. Clearly, it was going to continue its role as a lightning rod for discussion and debate in the book art field.
Posted by Betty Bright at 8:37 PM No comments:

Welcome to letterpressbkart, a blog I launched to gather and document the state of letterpress printing since 1980. This blog supplements my research underway since October 2008, which considers the growing interest in letterpress printing, not just within the book art world, but also as it participates in the larger contexts of art and literature, politics and publishing, and other influences that affect how artists make art.
To do that, I hope to look at a lot of books and prints in the coming years, and hear from printers and others who share a fascination with the letterpress medium and the book as an artistic vehicle. I'll report on conferences, talk about books I'm reading and artists I meet, and I invite my readers to comment on how you see letterpress evolving. Your voices are the reason why I have launched this blog. Finally, I wish to thank the Center for Craft, Creativity and Design in Hendersonville, North Carolina, for their generous grant support.

Betty Bright
Minneapolis, Minnesota, United States
I am an independent art historian, curator and teacher who specializes in book art because I think it is the most challenging and enlightening art form invented. I also work as an advocate and educator, advising private and public book art collections, and working in development and fund-raising in support of book artists and the organizations that help to nurture them. The audience for book art is a congenial group of artists and writers, librarians and curators, as well as every person who enjoys spending time with books and art who hasn't yet realized that they will love book art. My daughter and I adore our two cats, best buddies Minnie and Mickey, and I love travel and photography and all things visual and active. I am happiest when I am within sight of Lake Minnetonka every day; biking or walking or sailing in spring, summer and fall, or walking across its expanse in winter.